Since food options are limited inside the park, I recommend stopping for food before starting your Sequoia National Park visit.

If you are looking for customizable sandwiches, muffins, brownies, pastries or cookies, Wildflower Café is a good bet. They also offer salads, including chicken artichoke, but they aren’t ideal for all day sojourns. Prefer to sit down and eat before you kick of your Sequoia National Park one-day itinerary? Savor your food and imbibe your coffee on their shaded and welcoming patio and garden.

TOP TIP: If you have an extra 15-30 minutes, walk around downtown Exeter, where Wildflower Café is located, and admire all the murals accenting the buildings.

FUN FACT: Exeter, California, known as the “Citrus Capital of the World,” is revered for its sweet navel oranges.

Given you are in California’s agricultural heart, Main Squeeze Market is a perfect stop for oranges, nuts, local honey or a delectable fresh squeezed lemonade. Enjoy a frozen lemon slushie version as you get ready to use my Sequoia National Park travel guide to explore!

TOP TIP: If you’ve never tried creamed honey, buy some to add pizzazz to your Sequoia National Park day trip. You’ll thank me later! Lather it on a muffin or gobble it by the spoonful. Be forewarned, Nate’s Nectar orange creamed honey is decadent and highly addictive.

They also sell a serrano chili olive oil and a yuzu rice vinegar, which is tasty in stir-fried rice.

TOP TIP: Order the Three Rivers Wild Blackberry ice cream, which is the specialty flavor for this Reimer’s location.

If you covet caramels like I do, their homemade dark chocolate sequoia sized caramel squares are the BEST I’ve ever had. Reimer’s richness and flavor has set a new bar for caramels. If you quickly exhaust your caramel stash (as I did), fear not. You can restock in Oakhurst, California. And, indulge yet again at Ahwahnee Hotel’s Sweet Shop in Yosemite National Park as part of the Majestic Mountain Loop.

Are you a beef jerky fan? Venture across the street to Jerky This. Locals told me this small stand, with unpredictable hours, offers tasty jerky.

To orient myself and inquire about the best hikes and any potential closures, my first stop in any United States National Park is the Visitors Center. Park rangers have a wealth of knowledge, often suggesting places or the things to see in Sequoia National Park that might not be on your radar.

TOP TIP: I also stamp my Passport Book with the Sequoia National Park stamp. This makes a GREAT gift for any friends or family members who visit National Parks.

Ask about the Hospital Rock pictograph, which I recommend as your next stop, while you are at the Foothill Visitors Center.

Just after the Visitor Center, admire the ochre colored pictographs at Hospital Rock. Some speculate two shaman brothers drew these in the late 1800s.

FUN FACT: Did you know that pictographs are rock drawings while petroglyphs are rock carvings?

Stop at the Giant Forest Museum to learn more about the differences between giant sequoias and coastal redwoods. Then, choose the Sequoia National Park hikes you want to do and see the Sentinel Tree just outside the entrance.

FUN FACT: Despite towering 257 ft (78 m), the Sentinel Tree is nowhere near as tall as the other gargantuan giant sequoias that reside throughout the park. Starting with this 2,200 year old tree provides a fantastic comparator for the other giant sequoias to come.

Four of the world’s five largest trees reside in the Giant Forest near the museum!

Did you know that fires resulting from lightning strikes have burned every three to nine years in Sequoia National Park?

Fortunately, during the KNP Complex Fire in September 2021, dedicated firefighters wrapped General Sherman’s base and other giant sequoias with protective fireproof aluminum blankets. These heroes worked tirelessly to protect these historic behemoths and sequoia groves.

After the Sentinel Tree, venture across the road and follow the signs for Beetle Rock. This paved .5 mile (.8km) trail takes only 15 minutes. If it’s a clear day, you can gaze westward across the San Joaquin Valley towards the Coast Range, 100 miles in the distance.

Sadly, pollution and haze often obscure this view. While I could see the Coast Range’s layers, I also saw smog hovering above them. In order to minimize pollution and protect our national parks, climate and trees, decreasing our use of electricity, gas powered vehicles and plastics is imperative. If you are seeking some creative eco-friendly solutions to minimize your environmental footprint, check out my  Sustainable Travel Essentials ideas.

TOP TIP: Assuming the view is clear, this is a nice place to enjoy a snack or picnic. You could also stop here for sunset at the end of the day too.

After Beetle Rock, explore the placards along the paved Big Trees Trail and admire the sequoia trees around Round Meadow. Give yourself 1.25 to 1.5 hours to appreciate the grandeur and absorb the information along this leisurely and flat 1 mile (1.6 km) trail.

Some FUN FACTS you will learn along the trail include:

After augmenting your giant sequoia knowledge at the Giant Forest Museum and walking amongst giants on the Big Trees Trail, prepare to be awestruck by the General Sherman Tree, the largest tree on Earth! The General Sherman Tree has earned this title based on its trunk volume, 52,500 cubic ft (1,487 cubic m). Understandably, this famous icon is the most popular Sequoia National Park attraction.

Given that the General Sherman Tree is one of the most famous trees in the world, the parking lot is often full since this is one of the most popular things to do in Sequoia National Park. However, if you are patient and circle a few times, spots will open up as people are constantly coming and going.

After marveling at the General Sherman tree’s impressive stature, continue on the 2 mile (3.6 km) Congress Trail to appreciate some other giant sequoias grouped together throughout the trail.

TOP TIP: Hiking this trail in the late afternoon results in beautiful light, fewer crowds, and interesting shadows. I personally loved the ability to walk amongst these beauties in relative solitude from 3:30-5:00PM.

When hiking along any of these trails, it’s critical to “Leave No Trace” and stay on the trail. Going off trail can result in damage to the giant sequoias’ delicate tree roots.

Highlights along the Congress Trail include:

TOP TIP: Bring layers for your Sequoia National Park visit as the temperature is cooler at this altitude, particularly early and late in the day. My super light Arc’teryx Cerium LT hoody is always in my daypack.

One of the other fascinating stops along the trail is a 2,200 year old sequoia tree stump where you can see fire scars. Looking at the rings and scars, researchers estimate this hearty sequoia survived 80 fires!

Undoubtedly, Moro Rock is one of Sequoia National Park’s highlights. Soak in breathtaking 360-degree views of the Coast Range 150 miles west and alpine peaks to the east.

If you share my abject fear of heights, you’ll feel protected and hugged by the rocks and handrails while ascending the 350 steps to 6,725 ft (2,050 m).

FUN FACT: In 1917, wood steps were initially built to ascend Moro Rock. In 1931, these were replaced with stone steps.

TOP TIP: Since Moro Rock’s parking lot is small (~20 cars), visit at the end of the day when the crowds have dispersed. Also, don’t get fooled as I did and park in an earlier area along the road with spots for ~15 cars unless you desire extra hiking mileage. You’ll know you are in the correct spot if you see a restroom in the parking lot and stone steps directly in front of you.

Also, due to snow, be aware that the road to Moro Rock and Crescent Meadow is typically only open from mid to late May until late October/early November.

Access Crescent Meadow via an offshoot road near Moro Rock. If you have time after Moro Rock, this is a nice place to visit for a short 1.8 mile (2.9 km) hike. I’ve heard that black bears are sometimes spotted in the meadow.

If you enjoy historic buildings, be sure to add on a short detour to Tharp’s Log. Mr. Tharp built a small home in a fallen Sequoia tree.

TOP TIP: The Tokopah Falls hike is best in spring and early summer when the water is flowing strongest from melting snowpack.

Tunnel Rock reminds me of Arch Rock in Yosemite as it’s a rock balanced over a walkway.

TOP TIP: Although this is one of your first stops driving into Sequoia National Park, it’s a popular location for selfies. So, I recommend visiting Tunnel Rock on your way out.

On my next Sequoia National Park visit, I look forward to exploring Crystal Cave and Mineral King.

Things to Know Before Your Sequoia National Park Day Trip

If you will be visiting all three parks (Yosemite, Kings Canyon and Sequoia) as part of the Majestic Mountain Loop, definitely purchase the America the Beautiful annual park pass from NPS.gov or REI.com for $80. Since each US National Park costs $30-$35 to enter, this is the most economical option if you will visit more than two United States National Parks in twelve months.

Distances to Sequoia National Park (What Airports to Fly Into)

Wondering how far Sequoia National Park is from San Francisco or Los Angeles? If you are looking for the closest airport, Fresno is your best bet.

Do You Need a Reservation to Visit Sequoia National Park?

Nope, you don’t need a reservation. However, arrive as early as possible to avoid lines at the Ash Mountain entrance. Prepare to wait an hour on the weekends. It’s refreshing that this park is far less busy and congested than other national parks I’ve visited recently, including Death Valley, Grand Teton, and Yosemite.

How Much Time Should You Spend in Sequoia National Park?

One full day is sufficient to explore Sequoia National Park, unless you’d like to do some longer hikes.

Given the altitude (4000-7800 ft/1200-2400m), Sequoia National Park gets snow and some of the park roads are closed from late October to May. Therefore, to maximize seeing everything in the park, I recommend visiting from May to October.

Where to Stay to See Sequoia National Park 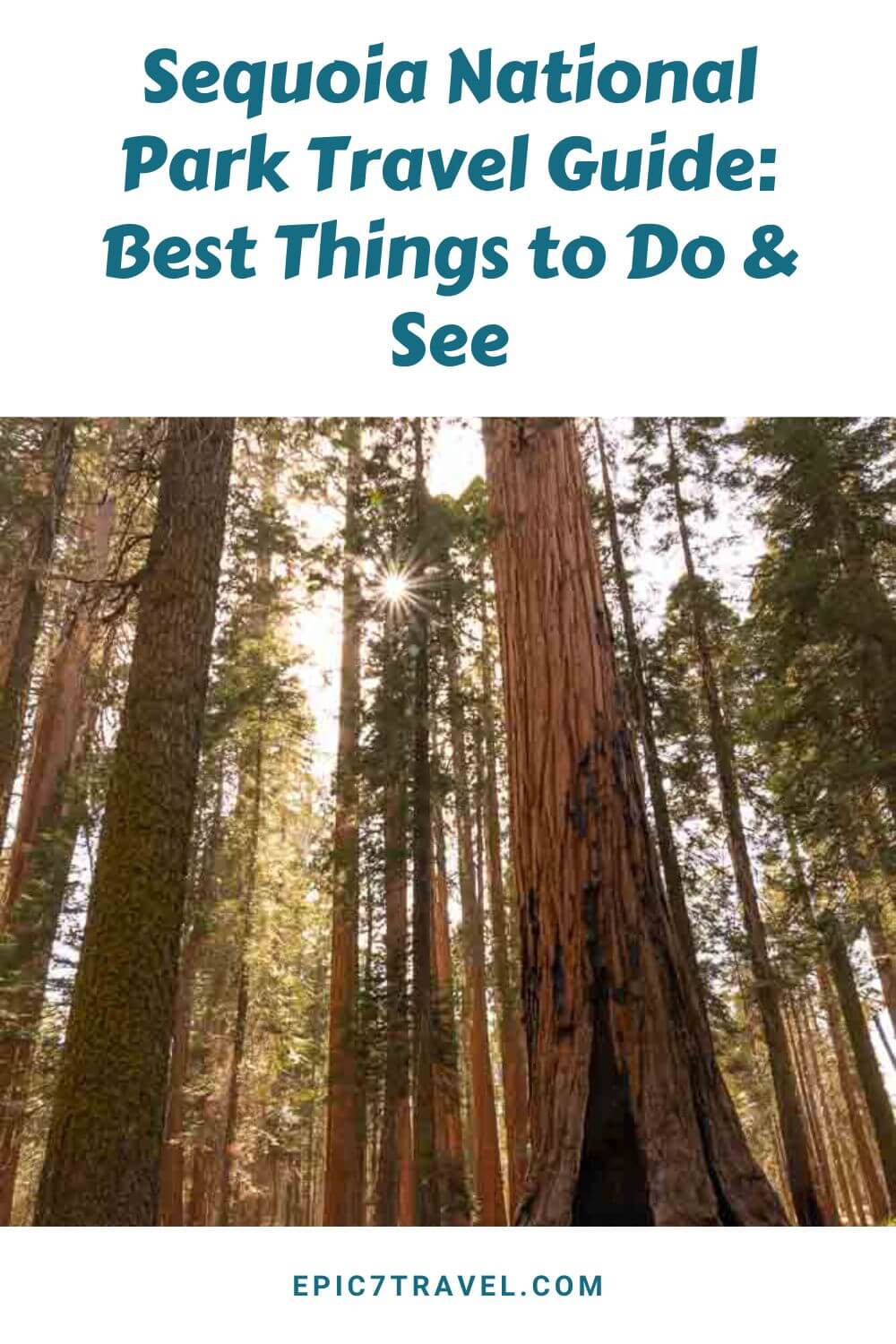 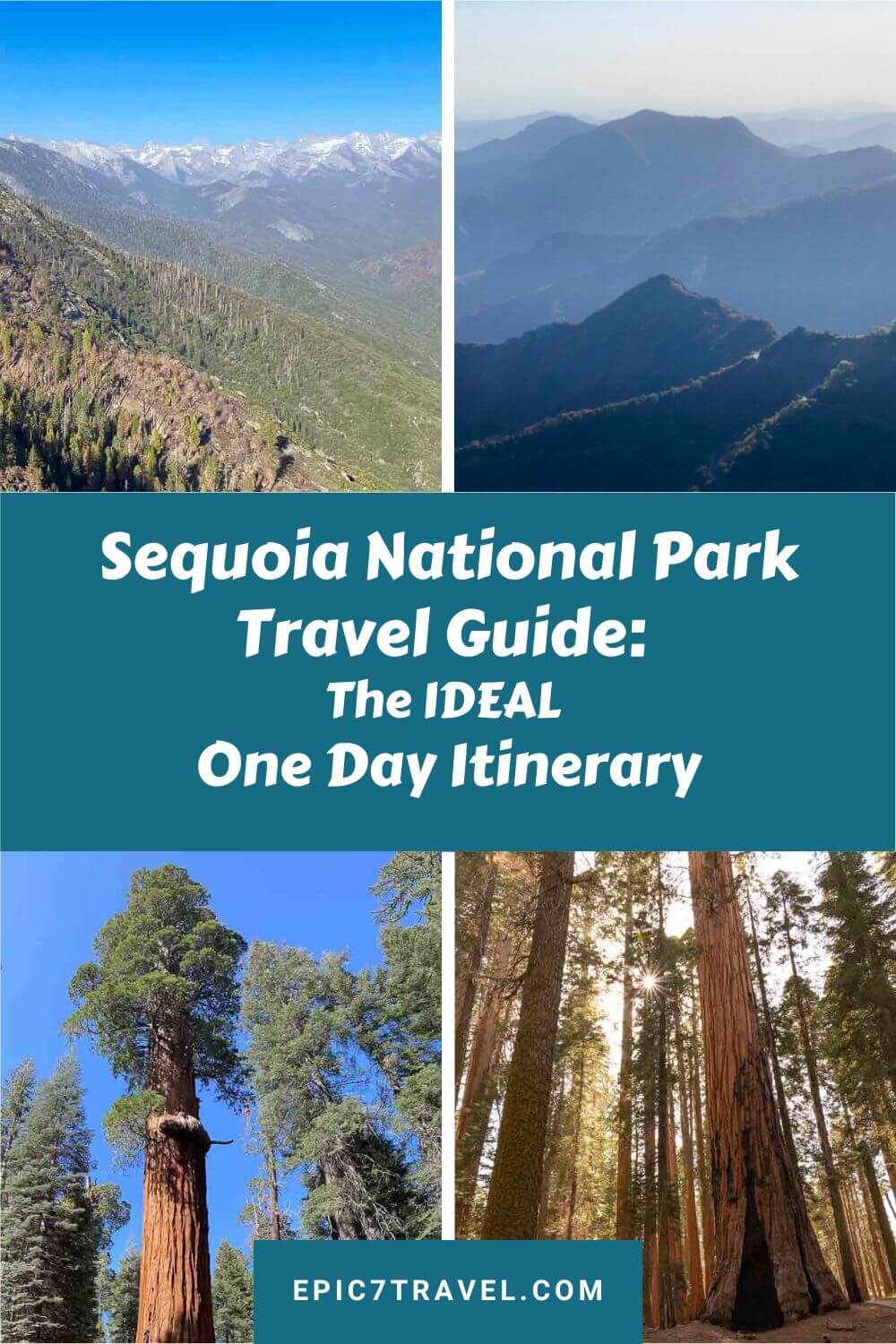 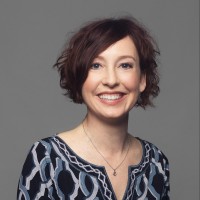